On Thursday, October 6, Bike Walk Knoxville was thrilled to host a casual bike ride along the North Knoxville greenways for community members and local elected officials. We were joined by the Chairwoman of the Knox County Commission, Courtney Durrett, and the Knox County Board of Education representative for District 4, Katherine Bike. The tour was a great opportunity to highlight community resources and the importance of greenway connectivity, and we're thankful to everyone who came out and rode with us!

Learn more about the tour! 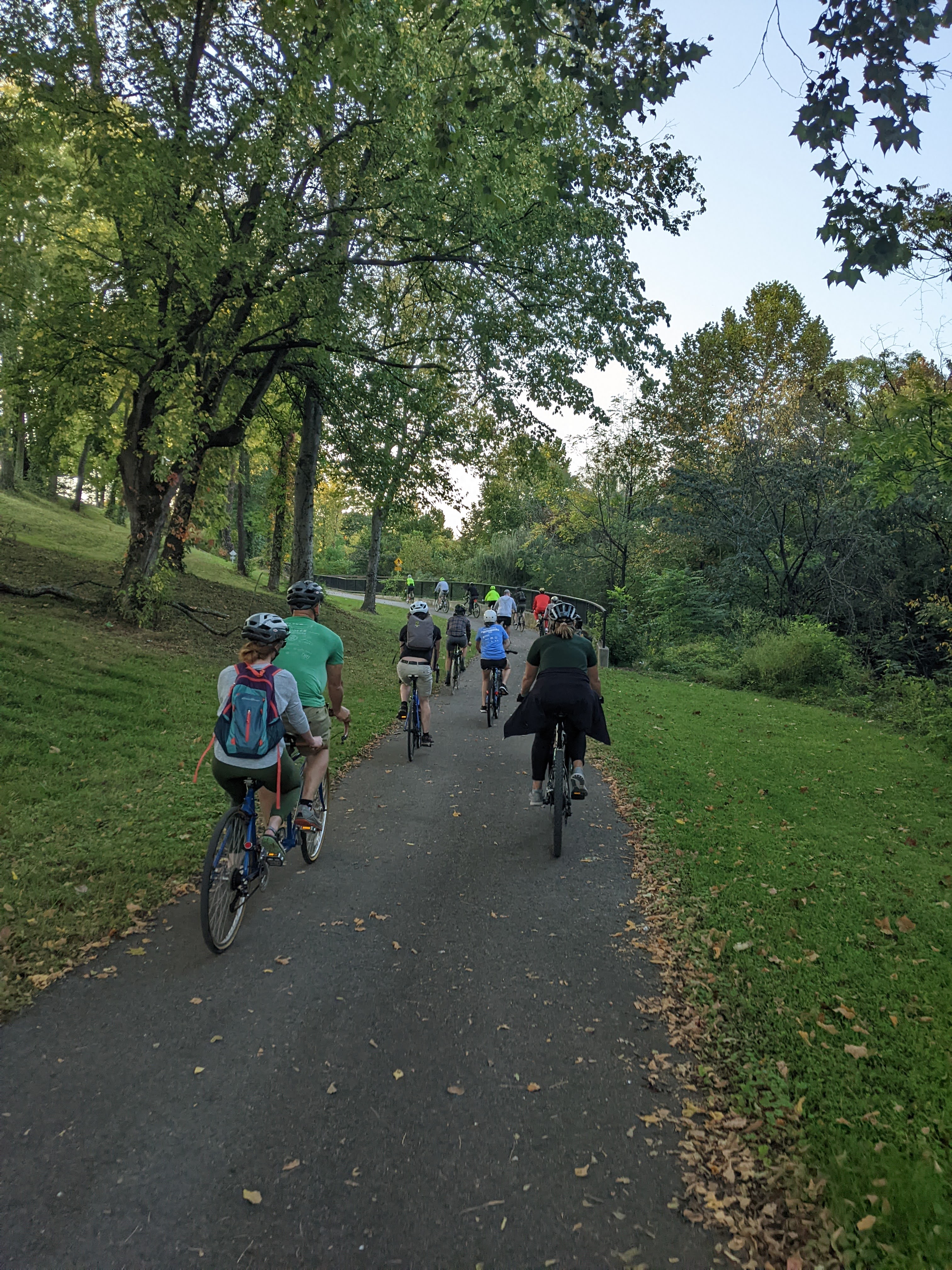 On Tuesday, May 10, Bike Walk Knoxville was proud to lead local elected officials, candidates, and community members on a walking tour of the Burlington area of East Knoxville. We were joined by City Councilwoman Lauren Rider, County Commissioner Dasha Lundy, Knox County Board of Education candidate Annabel Henley (District 9), and Knox County Commission candidate Dylan Earley (At-Large Seat 10). The tour was an incredible opportunity to learn more about how improving walkability can make a community safer and more economically productive.

Learn more about the tour!

April - Walk with Board of Education Candidates

On April 12, Bike Walk Knoxville was thrilled to host a walking tour of the area around Green Magnet Academy with local elected officials and candidates for the Knox County Board of Education. We are grateful to Mayor Indya Kincannon, City Councilman Charles Thomas, County Commissioner Dasha Lundy, and County Commissioner Larson Jay for joining us, as well as Green Magnet Academy Principal Jessica Holman. We were also joined by several candidates for the Knox County Board of Education: Reginald Jackson (District 1), Breyauna Holloway (District 1), Katherine Bike (District 4), and Annabel Henley (District 9).

Learn more about what was discussed here! 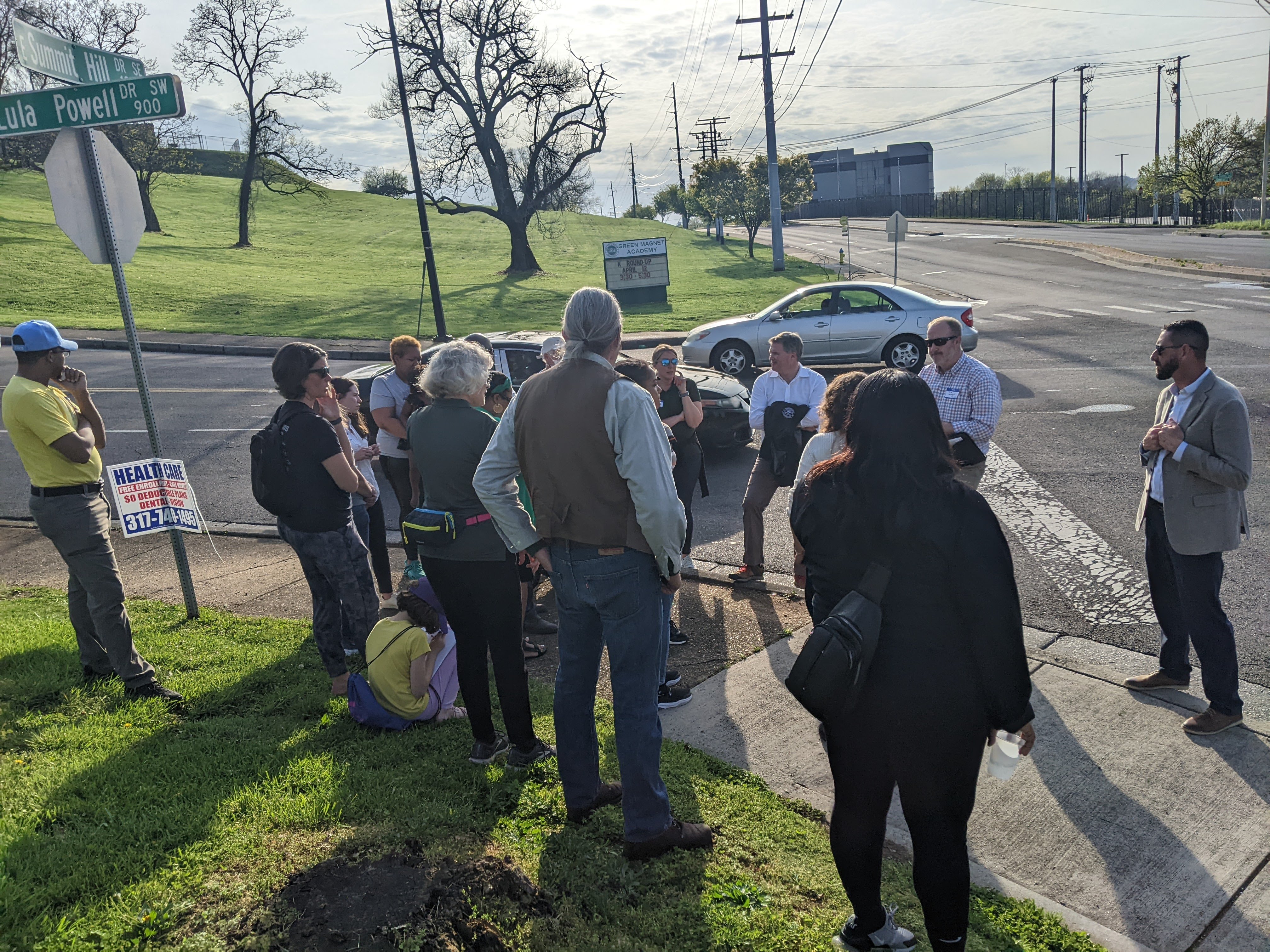 On August 16th, Bike Walk Knoxville led a walking tour of North Knoxville with local elected officials, including candidates for City Council! We were joined by several members of City Council, including Charles Thomas (District 5), Janet Testerman (At Large Seat B), and Amelia Parker (At Large Seat C). Several candidates in the City Primary Election also attended, including Seema Singh (District 3), Lauren Rider (District 4), Jen McMahon (District 4), and Deidra Harper (District 6). We are also so thankful to our partners at Schulz Brau Brewing Company for hosting our Pint Night benefit following the walk. Check out this coverage of the event from WBIR!

Learn more about what we discussed here!

Our Spring Bike Tour started in Tyson Park, and took us through Fort Sanders and World's Fair Park to Market Square. We rode back to Tyson Park through World's Fair Park and on Cumberland Avenue for a total of about 5 miles. We were thrilled to be joined by City Council Member Tommy Smith and several other community members who are passionate about biking. Click here to learn all about what we discussed on the tour! 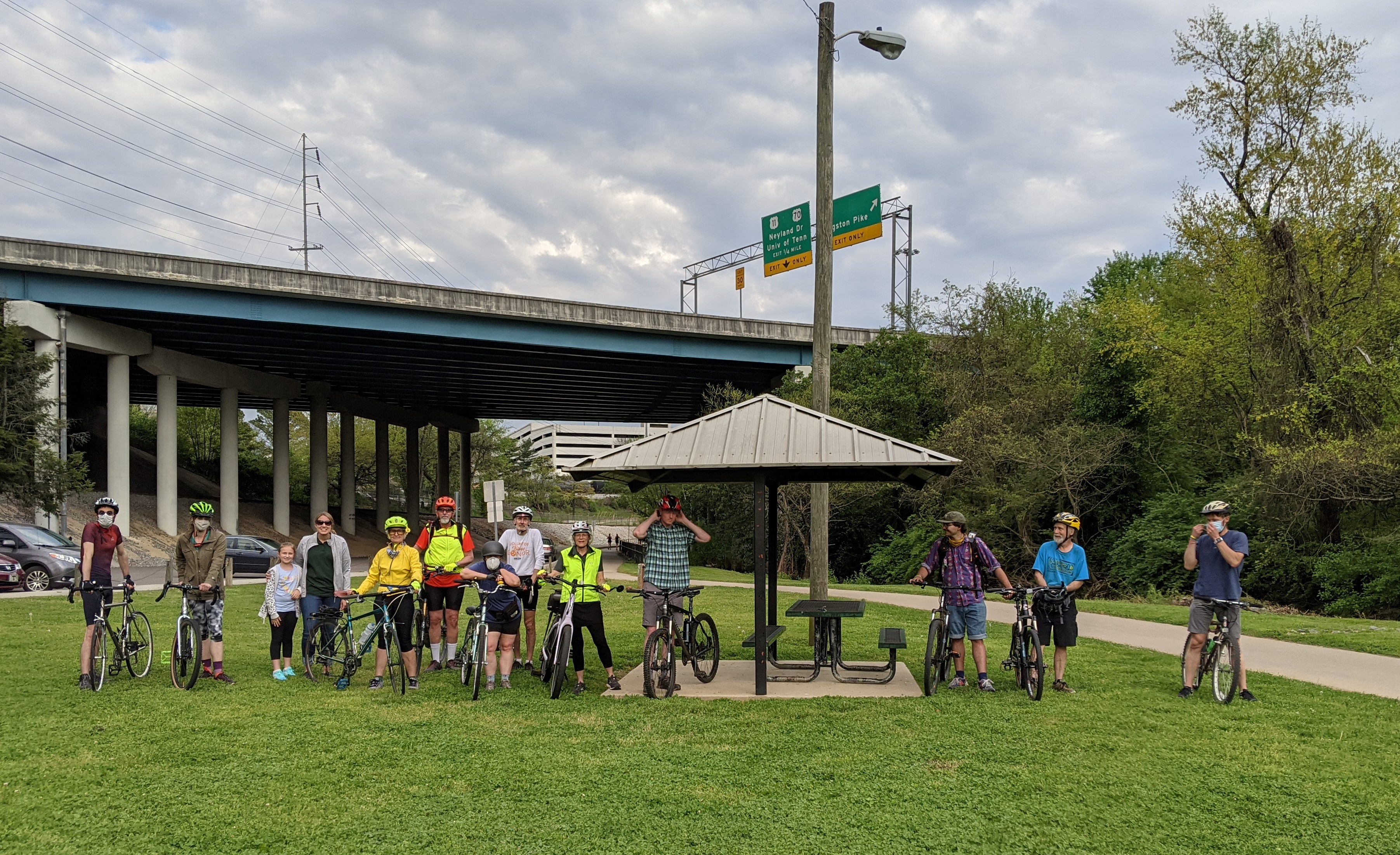 We had a great time touring the Tyson Park area on foot on Tuesday, October 27! We were joined by City of Knoxville Mayor Indya Kincannon and Director of Engineering Harold Cannon, as well as City Council member Lauren Rider. Several local business owners joined us as well, so a huge shout-out to SunSpot and University Liquors. We would also like to thank Kickstand and the Knoxville Regional TPO for their support. The walking tour was a great opportunity to see the benefits of, and challenges to, walking and biking in our community, and we are so grateful to everyone who came out! We look forward to hosting more tours in the future, so be sure to check back with us to find out more! Click here to read more about what we discussed on the walk. 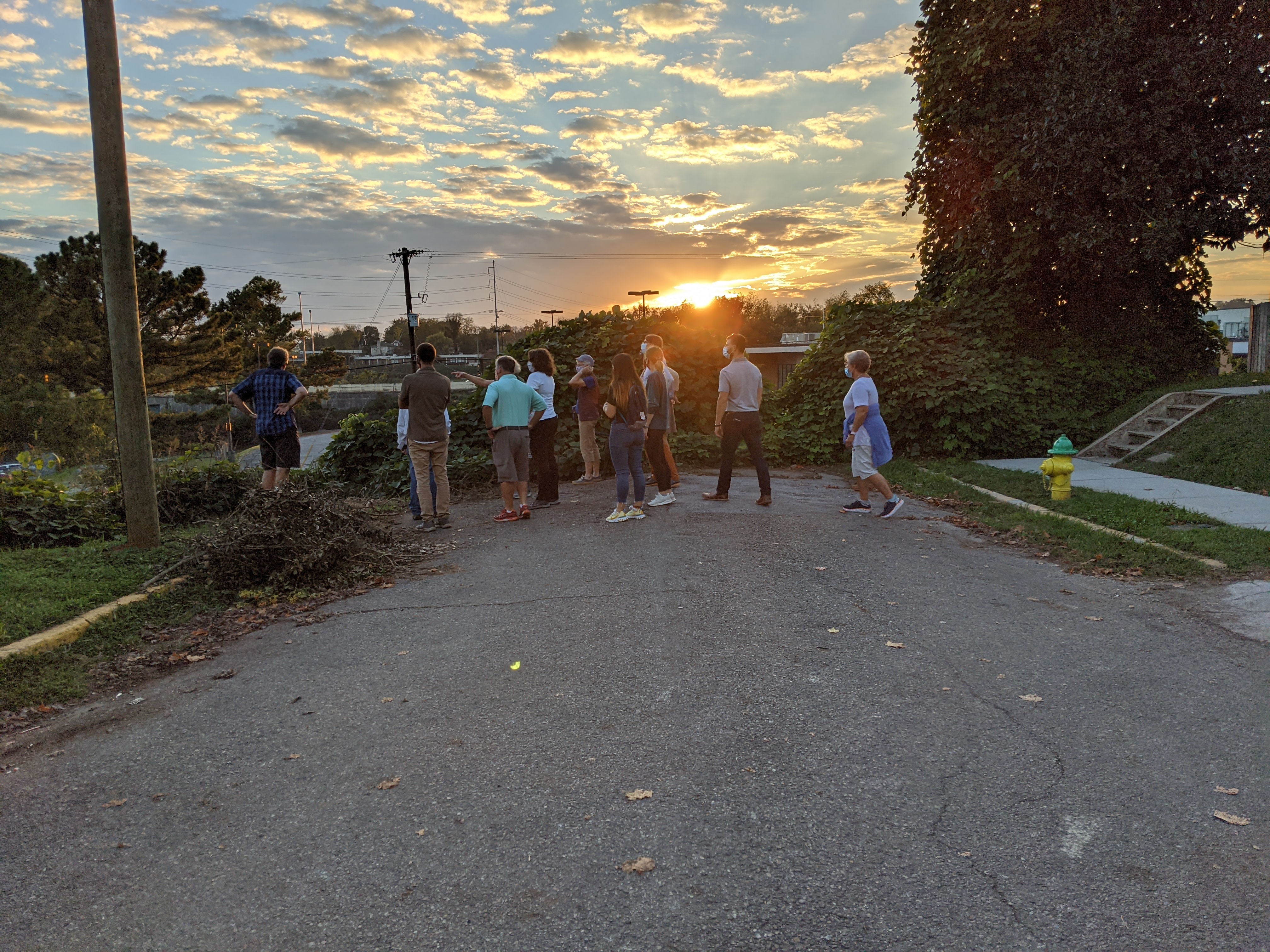 Our 2019 Tours with Elected Officials explored south, north and northwest Knoxville on foot and bike. We walked to the site of the new gateway park to the South Knox Urban Wilderness. We rode along the new infrastructure on Central Avenue and explored North Knox neighborhoods. Finally, we walked from Northwest Middle Community School to Victor Ashe Park along the greenway that connects the two. We were joined by elected officials, community members, candidates for office, and many other important community leaders; always a great place to network and learn! 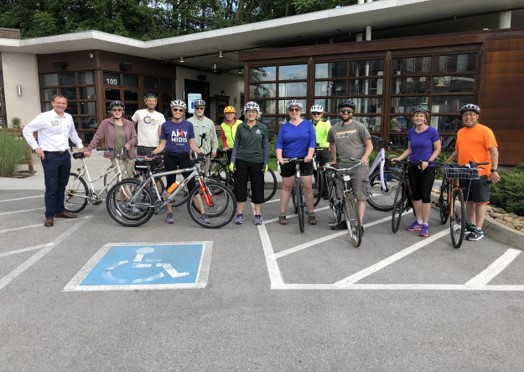 Our Fall 2017 walk focused on a road with very high transit use, especially by low income residents. The area was also a hotspot for cyclist and pedestrian collisions and fatalities. We also led a summer walk which highlighted the walkable commercial areas juxtaposed with unsafe conditions around Elementary and Middle schools. 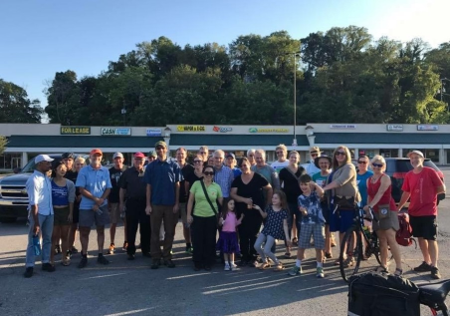 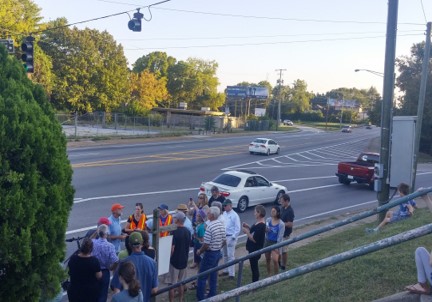 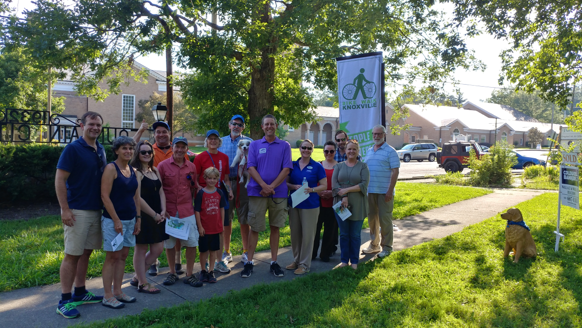 2016 was a busy year, with a bike ride that focused on evaluating newly installed bike lanes, a walk that highlighted sidewalk infrastructure in Bearden, a walk to demonstrate the lack of accessibility to schools, parks, and businesses, and a fall bike ride. 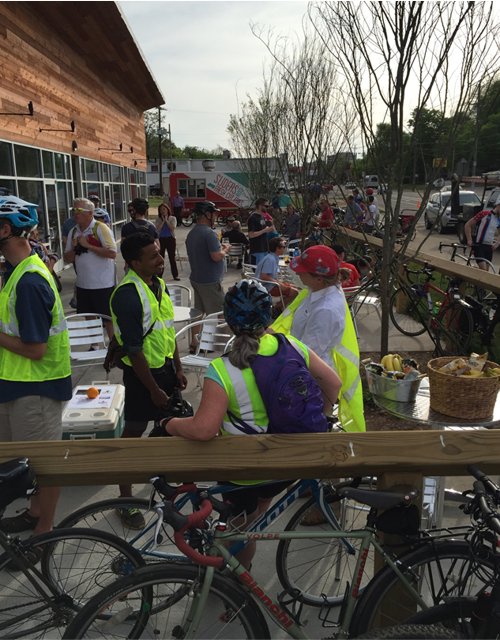 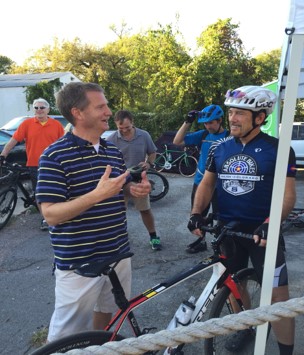 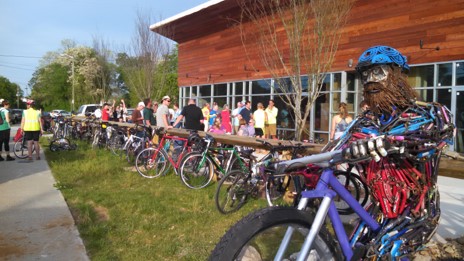 Our 2014 ride contrasted the safety and comfort of riding on greenways with the dangers of riding on major arterial roadways. 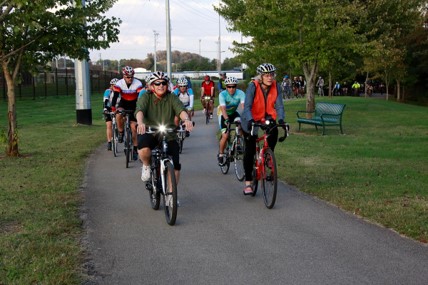 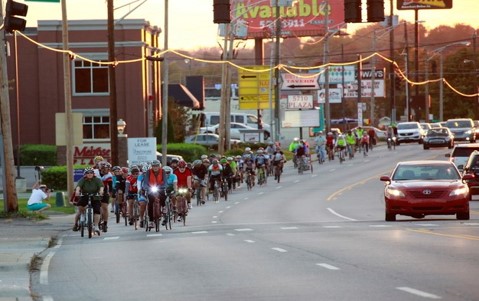 Our 2013 ride took us through residential neighborhoods, led by local middle schoolers who pointed out the dangers they encounter on their way to school. 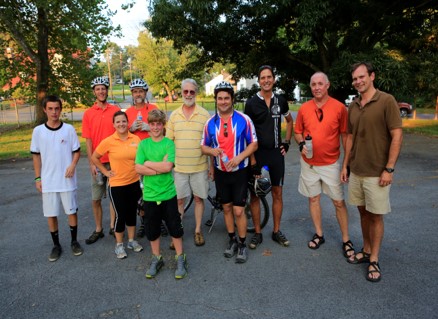 Our 2012 ride followed the greenway system and bike route from West Knoxville to downtown. 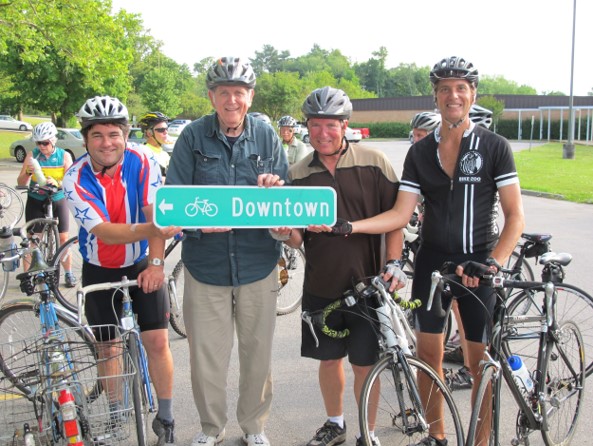